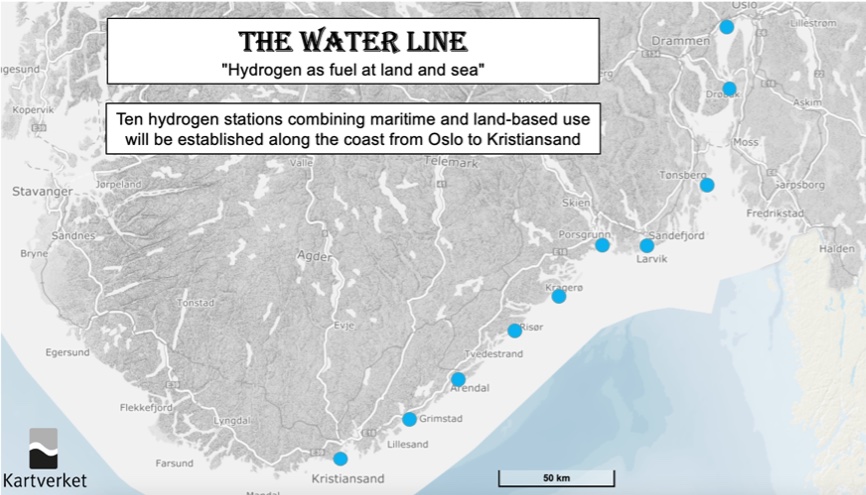 Hynion AS, the largest hydrogen station player in Norway and Sweden, has clear ambitions to expand its network of hydrogen stations.  "When the Parliament signals that they want a rapid development of a national hydrogen infrastructure, we are ready to pick up the ball and put it into play", says Ulf Hafseld, CEO of Hynion.

In the recent negotiations on the revised national budget, the governing parties and SV reached an agreement on the following decision:

"The Parliament requests the Government to investigate how the market, in collaboration with state authorities, can quickly develop a nationwide network of filling stations and hubs for hydrogen for land transport, maritime transport and industrial purposes and report back on this in the revised state budget for 2023."

As a response to the above decision, Hynion is launching a plan to develop a network of hydrogen stations that will supply maritime and land-based traffic on the coastal stretch from Oslo to Kristiansand.  "There is an ever-increasing interest in the use of hydrogen at sea.  By combining hydrogen stations so that they can supply both land-based vehicles and boats, we can get a more cost-effective start-up of the first stations", says Ulf Hafseld, CEO of Hynion.

Hynion has already started a collaboration with the Norwegian boat manufacturer Hyrex to develop a floating hydrogen station to supply Hyrex's new leisure boat with hydrogen.  "Hydrogen will have an important place in the boating life of the future, says Henrik Torgersen, general manager of Hyrex.  The energy consumption for moving at sea is significantly higher than on land.  Hydrogen will therefore be a better solution for a large part of the leisure boats to ensure the users an equally good experience with zero-emission boats as they have with the use of fossil fuels today", concludes Henrik Torgersen.

Several actors, such as Redningsselskapet, consider hydrogen fuel for its new boats.  With ten stations along the coast from Oslo to Kristiansand, this network will constitute a base infrastructure in a region with substantial boat traffic, as shown in the map below.

Hynion believes that ten stations should be built on this coastal strip in the first round in the project “The Water Line”.  We are in dialogue with market players who want to use hydrogen on land and water and would like to engage municipalities and companies along the coast to participate in this network.  Together, the partners and authorities will define a project that can respond to the Parliaments' desire to establish a maritime and land-based hydrogen infrastructure.  Contact will be established with relevant actors on the government side to see how this network can be designed and how the project will be best implemented.

Why you should choose hydrogen

Emission-free and environmentally friendly transport is crucial for steering society in a greener...

Last week brought two important pieces of news about the further development of hydrogen in the...