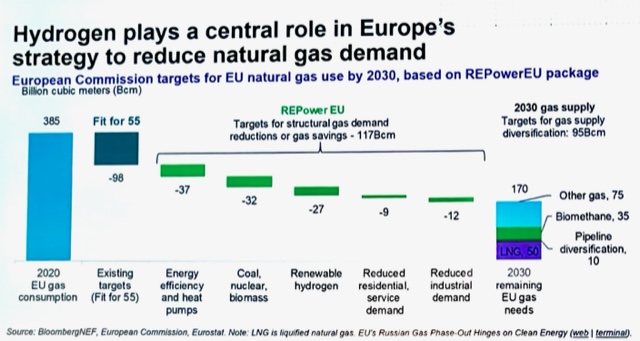 This week the European Hydrogen Week takes place in Brussels. There is little doubt that Hydrogen has been promoted on the energy map in the EU, and that hydrogen is getting an even more dominant place now than just a few years ago. The current power price surge as a result of Russia’s attack on Ukraine, is just the final element that paves the way for hydrogen´s role in the energy mix.

Hydrogen is considered as the flexible companion to electricity and can be used in a multitude of applications; as a chemical in industrial processes, as well as a chemical in the making of e-fuels used as a fuel for cars, buses, trucks, trains, boats and airplanes.

EU´s current ambition is to become a large producer and user of green hydrogen from renewable energy sources, thus reducing the dependence of natural gas and other fossil fuels. Executive Vice President Timmermans was very clear in his speech; stating that hydrogen is now on the top of the agenda in EU. Speaking of numbers; EU plans to produce 10 million tons of green hydrogen annually by 2030 and import another 10 million tons. To make this happen there is a need for speed, which was pointed out by several of the EU-representatives.

Recently the Alternative Fuels Directive (AFID) from 2013 was updated and upgraded to AFIR – Alternative Fuels Regulation, meaning it will be compulsory for all member states to implement. Last week the AFIR was discussed in the EU parliament and several parameters was upgraded by a large majority of the members. As for Hydrogen transport infrastructure, the distance between stations on EUs core and comprehensive network was reduced from 150 to 100 km. Besides, the time to fulfill this minimum requirement was moved from 2030 to 2027. The final round of discussions will take place among the member states shortly, but no major changes are expected according to PM Ismael Ertug who has been pushing the AFIR through the EU Parliament. 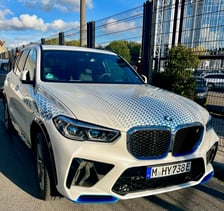 On the exhibition the new BMW iX5 hydrogen was shown, and the representative from BMW stated that they now will start to produce a small demo series and promised massproduction in a few years time. BMW was clear that it was necessary to

have both battery and hydrogen as fuels to ensure that they covered all applications. He also stated that the AFIR would give certainty for the car manufacturers that there will be an infrastructure across Europe.

So maybe the AFIR is the magic wand needed to overcome the famous chicken and egg dilemma?

Further, the new heavy-duty truck from Nikola was show at the exhibition. Nikola stated that deliveries to customers was planned late 2023/early 2024 in Europe.  With tank capacity of 72 kg hydrogen at 700 bar, there will definitely be need for Hynion´s new high capacity stations.

The trends shown at the Hydrogen Week, coupled with EU´s AFIR, tell us that that a Hydrogen wave is in the making, and that the Hydrogen infrastructure for the transport sector needs to be in place in Europe – quickly. Hynion takes an active part in this development. The next generation stations that Hynion are building in Sweden, will be in operation late 2023 – early 2024 – perfectly timed to accommodate the new trucks powered by Hydrogen, concludes Ulf Hafseld, CEO of Hynion.