The Ministry of Transport visits the Høvik station 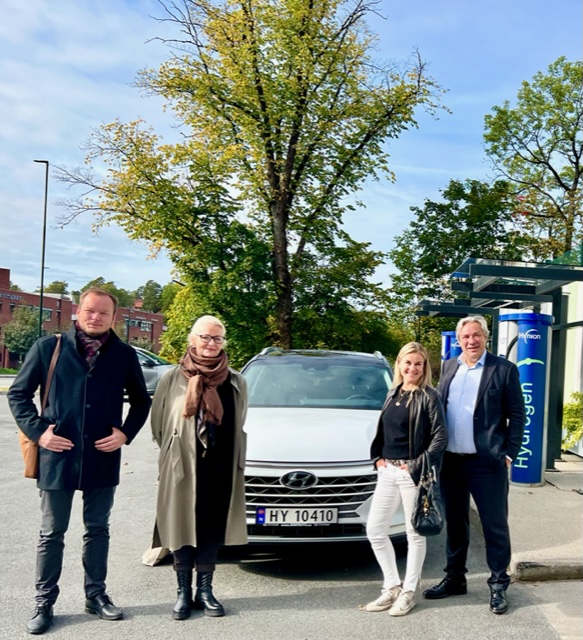 This week, high-level politicians from the Ministry of Transport visited the Høvik station, Northern Europe's busiest hydrogen station, to see and learn how a hydrogen fueling station works. In addition, they wanted to hear from the hydrogen car owners and the station builders about their experiences, challenges and future needs.

State Secretaries Mette Gundersen and Johan Vasara started the visit by watching how easily and quickly a hydrogen car fills the tank. The person who showed how to fill the tank was Margrethe Wam Solvang from the Hydrogen car association: She passionately talked about her positive experiences from driving a hydrogen car for many years. "The family has two hydrogen cars, and we are very satisfied. The long driving range and the free toll rings and the opportunity to drive in the public transport lane without passengers are among the benefits of driving a hydrogen car," said Solvang. She emphasized, however, that there is a need for building more hydrogen stations in Norway. "It will make it more attractive to buy and drive hydrogen cars", she commented. Solvang invited State Secretary Vasara to test drive the hydrogen car, which he happily did.

The general manager, Ulf Hafseld, then showed the state secretaries the technology behind the station, including the station's new compressor. Hafseld emphasized the station's focus on security, and showed how the security systems work.

The State Secretaries were very excited about the visit. They gained an increased understanding of hydrogen as an important fuel in the green shift. In addition, they got a better understanding of what it is like to run a hydrogen station and what support schemes are needed to develop a national network of stations. The visit gave the state secretaries a unique opportunity to experience a fully operational and very busy station. In addition, the conversation with hydrogen drivers provided valuable insight into their needs, but also an understanding of the advantages of driving a hydrogen car.

Hynion was notified yesterday that the Energy Authorities are providing SEK 61,4 million in support...

The requirements for hydrogen infrastructure are being tightened in the EU

On Wednesday, the EU Parliament adopted its proposal for new EU rules for infrastructure for...

This week the European Hydrogen Week takes place in Brussels. There is little doubt that Hydrogen...