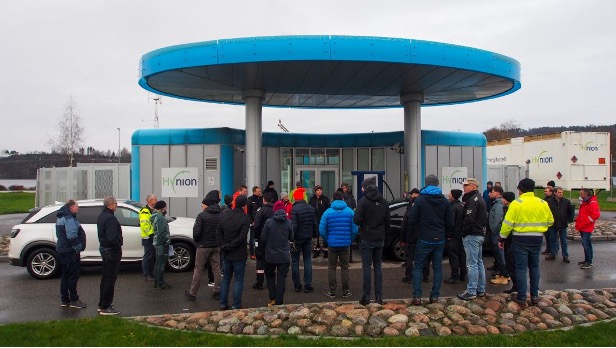 Hynion hosted and co-organised the first national hydrogen safety workshop which took place at Herøya last week. The workshop, which is part of the EU project HyResponder, was attended by fire and rescue agencies from all over Norway, in addition to several hydrogen companies. The aim of the workshop was to gain knowledge of how to handle hydrogen in a safe and good manner. According to the organizers, this goal was achieved. The participants went back to their work with sound knowledge of how to implement good safety routines in handling hydrogen.

Hynion collaborates with the University of South-Eastern Norway, which is a leading capacity in hydrogen safety. Hynion is a chosen partner because the company has the longest experience in operating commercial hydrogen stations in Norway. In addition, Hynion´s station at Herøya is a good example of a facility that has been in operation for a long time without any incidents that require action from the fire and rescue agencies. It was of high importance for the workshop that the participants could get training at real hydrogen station. The participants benefited fully from the workshop. It provided " hands-on " experience, as well as demonstrating how a hydrogen station is build and operated in order to adhere to the best security and safety routines.

Knowledge is key in security management

If an incident does occur it is important that those who work with hydrogen have good routines, and that the fire and rescue agencies actually know what to do when they arrive, said André Vagner Gaathaug, professor at the University of Southeast Norway in an interview with the news agency Hydrogen24.no ( https://hydrogen24.no/2022/12/02/fullt-hus- when-Norway's-first-safety-workshop-on-hydrogen-went-off-the-stack/ ). Hynion's CEO is of the same opinion, and emphasizes that safety and preparedness are in the forefront of the company´s thinking and handling of hydrogen at their stations. Hafseld is very satisfied that the safety workshop focuses on training and good routines for handling hydrogen.

Gaathaug used the introduction of electric cars to the market as an example. The electric cars were introduced to the market so quickly that at first there was a lot of uncertainty about how they should be handled if an incident occurred. This is something we want to avoid with hydrogen. The aim is thus to bring knowledge and information to the fore, because it provides a solid security base of what to do - and not to do, in case of an incident, Gaathaug said in the interview with Hydrogen24.no. 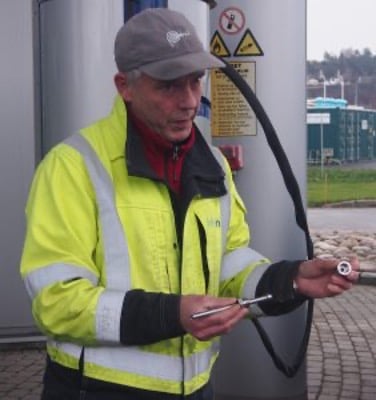 The workshop started with a theoretical review at the University, before the participants moved to Hynion's hydrogen station at Herøya.

Here, the participants were divided into three groups, which trained at different scenarios. The training included:

This way, the participants received both a theoretical and practical overview of what to be prepared for if an incident occurs in a hydrogen car, at a hydrogen station or in an electrolyser.

The participants were active and had a lot of questions. “We received important inputs along the way, in addition to the participants sharing their own experiences”, organizer Gaathaug informed. In other words, it wasn't just one-way communication, but rather a dialogue with professionals from different professional groups.

Hynion's manager Ulf Hafseld was also very satisfied with the workshop. "It is important to have a good dialogue and share knowledge with the rescue agencies and the professional networks regarding how to handle hydrogen," he says. “By carrying out “hands-on” training like this workshop did, we do get prepared through discussions and knowledge-sharing. This way we can more easily make the right choices in a critical situation. We can hinder potential dangers more quickly, as well as deal effectively with those with a lower level of risk," concludes Ulf Hafseld.

Hynion has entered into an agreement to supply buses in Sandviken, Sweden, with hydrogen and, at...