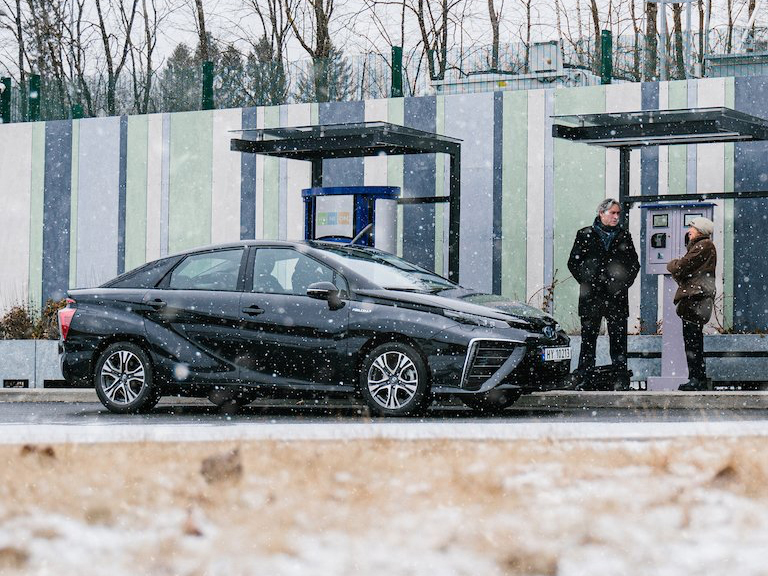 Emission-free hydrogen is part of the solution to how Norway will achieve its climate goals. – We only use renewable energy sources in hydrogen production, says the Hynion manager.

In Norway, the investment in electric cars has been good for private transport, but hydrogen will play a key role in reducing emissions from the transport sector further.

– Will revolutionize the transport industry

This is especially true for commercial transport, where vehicles such as taxis and vans are frequently used and cannot spend a long time charging. Filling the tank of a hydrogen car takes about 3 minutes.

- Hynion will only use renewable energy sources or biogas in hydrogen production. Today, the hydrogen sold at the hydrogen station at Høvik is produced using water electrolysis, says Hafseld.

Emission-free zones will increase the pace

Oslo, Bergen, and several other European cities are planning to introduce emission-free zones.

This will probably increase the need and the pace of actors within the taxi and goods transport industry to obtain emission-free vehicles. Some taxis have already gone for electric cars, but due to the charging time, hydrogen will probably be a preferred solution when a sufficient number of hydrogen stations are in place.

Both Toyota Mirai and Hyundai Nexo are cars that can work in the taxi industry. When it comes to vans and commercial vehicles, well-known classics such as Renault Kangoo and Renault Master are alternatives that are available with hydrogen solutions.

Within a few years, it is expected that there will be several more alternatives both within passenger cars/taxis, goods transport, and heavy transport vehicles that can run on hydrogen.

In the report "Hydrogen in the low-carbon society of the future", researchers from NTNU, SINTEF, and IFE state that hydrogen will be important for Norway to achieve its climate goals:

"Hydrogen can contribute to Norway achieving its climate goals and be a key factor in Norway's ambition to create green industrial growth and in the restructuring of the Norwegian process industry."

Studies from NTNU, SINTEF, and IFE show that hydrogen will play a crucial role in freight and goods transport, especially over long distances.

They point out that the demand for electricity and the strain on the electricity grid will increase sharply as a result of increased electrification since hydrogen production is also dependent on electricity from, for example, hydropower. But they emphasize that hydrogen production can act as intermediate storage that may distribute the energy consumption through the day.

"It can also be switched off during periods of high strain, thus relieving the power grid and not providing the same upgrade needs."

How emission-free hydrogen is produced

By electrolysis, water is split using electricity into hydrogen and oxygen. When hydrogen is produced in this way, with electricity from hydropower, solar cells, or wind turbines, this is entirely free of CO2. Hynion ensures that all the power they use comes from renewable energy sources by purchasing guarantees of origin.

Why you should choose hydrogen

Emission-free and environmentally friendly transport is crucial for steering society in a greener...

Last week brought two important pieces of news about the further development of hydrogen in the...

Hynion AS, the largest hydrogen station player in Norway and Sweden, has clear ambitions to expand...